One of the most important skills of roman architects was the ability to build roads. Roads were important military facilities that allowed roman legions to reach every region of the Empire. At its greatest extent, the road network of the Roman Empire measured 8.000 km divided into 29 main roads that started from Rome towards all territories of the Empire. This network was so important that survived to the fall of the Roman Empire, it was used from Late Antiquity through the Midde Age till today. Several modern roads follow the ancient paths. Along this network of roads Rome did transport its legions, its politic, its authority.

A typical roman texture of basolato  presents large polygonal tiles of basalt whose borders are perfectly mutually aligned. The design is so typical that the less flaw in the texture can spoil the effect.
I was unable to find a decent texture of a basolato for longtime. I have tried the following techniques with poor results :

After having tried several techniques to generate a decent texture, I have decided to use Lightwave to built a section of a road using stones meshes to which I have applied high resolution basalt texture found on the net. The technique to make a seamless texture with Lightwave is not very difficult if you apply the ‘concept’ of seamless textures to meshes. Here the technique I have used to generate a good quality texture of a roman road:

It took me about 1 week to produce this texture, ’cause lot of reworking of the several stones objects (there are 63 different stone meshes in the texture) and mostly to fill the space between the stones. I have applied the same technique to make another hard-to-fine texture, the Opus Spicatum. 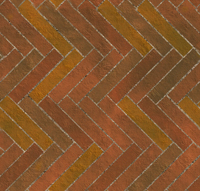 The road texture in action

With the use of some smart layer of procedural textures for dust and dirt on top of the road texture it is not possible to identify repetitive patterns on the road and the final effect is rather satisfactory. 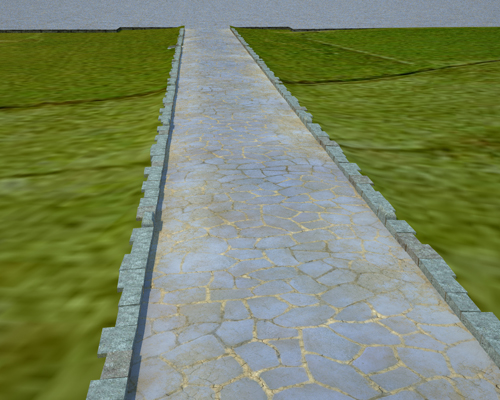